The ISSF Extraordinary General Assembly concluded yesterday, with the adoption of a new Constitution being the main item on the agenda.

In accordance with the current Constitution, which has been in place since 1980, the new constitution had 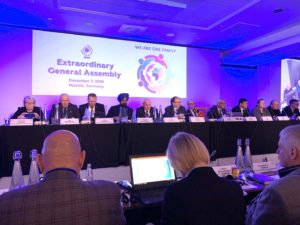 to be approved by two thirds of the delegates, representing 147 out of 160 ISSF member federations, in order for it to be implemented.

Consultation work took place throughout 2019 with a number of proposals received.  Discussions with representatives of continental Confederations were also carried out and the new Constitution was further debated at the General Assembly itself. Following the ballot the new ISSF Constitution was approved having received the support of the required majority of the delegates thus maintaining the balance of interests.

The Constitution significantly increases direct representation of Confederations and Federations in the management structure of the ISSF. It allows for a potential increase in the number of competitions, expands prospects for direct financial support to Member Federations, strengthens the role of athletes and fully implements good governance principles, the  Olympic Charter and the WADA code.

In addition the delegates supported the proposal of the Executive Committee to reduce membership fees to 500 USD, which is a third of the previous cost. Delegates also supported the decision to  have an equal amount of World Championships in shotgun, rifle and pistol in each Olympic cycle.

About the Author: Guðmundur Kr. Gíslasson